Why the cry out method doesn't work for me.

I'm sure I have mentioned before that I don't like the "cry out method" when training your kids to have good sleeping habits.  I also don't pay attention to all the rules doctors or books try to give on sleep habits i.e.: You must lay your baby down in their bed before they fall asleep and you should not let them fall asleep in your arms.  Don't doctors and books know that it is one of the best things in the world to hold a sleeping baby??!!!  I am very aware that all kids are different so what works for some may not work for others so please no one be offended.  I don't think you are a bad parent if you have used the cry out method because I have heard from multiple people that it worked for them.  And don't get me wrong fussing a little is much different then screaming bloody  murder.  I don't go get my kids at the tiniest amount of fussing but I refuse to let my kids scream.  The few times I have actually let them scream and then finally succumbed I have found Merrill tangled in his bumper and terrified (tore that off and will never use one again.), Eva with throw up all over herself and her crib, and Scarlett with her leg stuck between the bars.  So, again if my kids are screaming I am going to check on them and, dare I say it, pick them up and comfort them.  Moving on.


This past week has been really hard with Merrill.  He hasn't slept through the night in a week.  He has woken up every 1-2 hours screaming and arching his back.  It was clear he was in pain and I thought it was GI related or teething related.  I tried everything I could think of but nothing worked.  Yesterday was his 9 month doctor appointment.  I told the doctor about how hard the week had been and he gave me this big lecture on sleep habits and how I should not feed him again until morning, I should not pick him up, etc etc.  He thinks I am a bit of a hippie because I am on a delayed vaccination schedule and I don't feed my kids dairy and he is nice about it but I think he thinks I am extreme.  Yes, I know, snuggling your kids when they scream at night is extreme!  Anyways, after the lecture he checks Merrill's ears and he has 2 ear infections which look really bad.  I was so happy he had them because I had a reason for the craziness.  I was so glad I continued to snuggle him because I would have felt so guilty if he was in pain and I just let him scream.  I still feel guilty I didn't get him to the doctor sooner.  Ear infection just didn't cross my brain for some reason.  Other than the night time he was so happy and acting normal.

Merrill slept so much better last night and I fully expect him to sleep through the night tonight.  Our whole families sleep  habits will be back to normal!

Seriously, who could resist picking up this kid if he was crying. 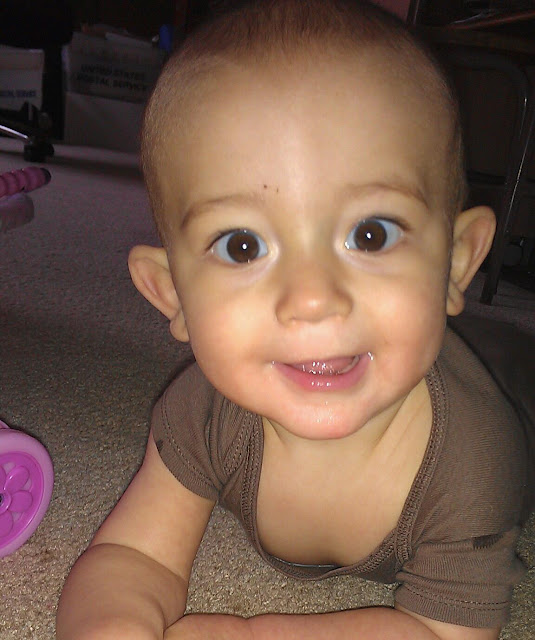